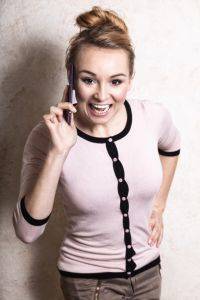 Is That Growing From Your Ear???

Ok – I have to admit it …. cell phones are getting way out of control. Well the phones aren’t, the people using them are!!! There are times when it is appropriate to use your phone and there are times when it is NOT appropriate to use your phone. I was having lunch at Subway today when a woman walked in – yes, she was talking on the phone. She proceeded to talk while she waited in line, she talked while she was ordering her sub, she talked while she was waiting for her sub, talked while she paid for her sub and yes, talked all the way out the door. I could not believe she did not put that phone down for one second. Don’t people realize that was incredibly rude to the people around and even more rude to the Subway employees who were taking her order? What on earth could be so important she could not get off the phone to order lunch? Or, it if was that important, she should have stayed outside until she finished her call and then come inside and ordered. When you are in a public place, we do not want to hear your phone conversation people. Have a little courtesy and respect for others and HANG UP THE PHONE!